HAMLET IN BED at the Rattlestick Playwrights Theater 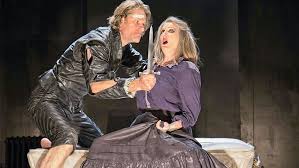 In this noir version of Shakespeare, author/performer, Michael Laurence begins the play holding the skull of Yorick while telling a tale about not being able to fix a toilet. Michael (Hamlet)  is weird, zany, but deadly serious.  At thirty-nine, he’s old for a Hamlet, but as he says, Gielgud played Hamlet at 50. Michael’s Hamlet was given up for adoption and has never known either of his birth parents. Through a coincidence (isn’t that how Shakespeare’s plots often go?) he thinks he’s found his true mother’s diary. His Gertrude (Anna in this play) is the Emmy and Golden Globe nominated Annette O’Toole. Anna is a former actress, a present drunk and cat lady who hasn’t been on stage since, he deduces from her diary, she gave him up. He tries to reel her into his life by casting her as Gertrude in his play. They begin a tempestuous relationship that has them screaming, dancing, and coming as close to incest on one of the mattresses.

The play weaves the lines of Hamlet into this contemporary story, not, of course, trying to mimic iambic pentameter, but there’s poetry here nontheless.  (Wish I had a copy of the script).  Laurence also wrestles with interpretation.  He poses questions such as was Gertrude complicitous with the murdering uncle or just an older woman blinded by lust? Was Ophelia pregnant with Hamlet’s child? Who owed an apology to whom?

The staging by Rachel Hauck is surprising. Michael hangs up a mirrored ball which serves as a disco ball and a planetary orb as Michael has a fantasy trip through the stratosphere.  She creates dimension by allowing us to see the characters arguing in a small room to the right of the stage. Scott Zielinski (lighting) projected a snow falling softly and the starlight for the space voyage.  Director Lisa Peterson (Obie, Lionel Award, Drama Desk nominations) pulled powerful performances from this duo. Bart Fasbender (sound) created a ghostly feel with the voices offstage.

Hamlet in Bed might not be for everyone, but except for a few moments (such as playing “You Don’t Know Me” as Anna and Michael dance), the play is for me. I’d love to follow it up by seeing O’Toole and Laurence in an actual version of Hamlet.