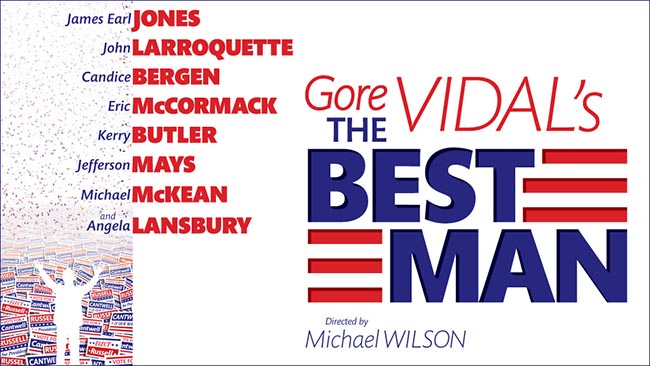 Set in 1960 during a National Convention, two delegates—William Russell (John Larroquette) and Joe Cantwell (Eric McCormack) go at each other for their party’s nomination., each currying the support of the dying ex-president Arthur Hockstader (James Earl Jones.)

Like Adlai Stevenson, whom Russell seems to be based on—an intellectual with ideals and wit, has a down-to-earth wife (Candice Bergen) from whom he’s been estranged from for years. (Russell for marital infidelities, Stevenson—hey, does anyone out there know what happened between Stevenson and Ellen Borden?) Alice Russell, like Ellen Borden, agrees to be at his side so that he can win, perhaps she can too.

Cantwell’s wife Mabel (Kerry Butler) a dolled-up blonde like Pat Nixon, but hot, steamy hot, is as loyal to her husband as she is to booze and stupidity who seems to get along famously with Sue Ellen Gamadge (Angela Lansbury) a Southern widow who warns both wives that women don’t like the first lady to do too much the way that Eleanor Roosevelt did or too little like Mamie Eisenhower.)

Joe is just the type to be on Fox 5,  interrupting his opponent to press his point whether or not he believes in it himself., an anything-to-win kind of guy.  He’s gotten hold of Russell’s medical records which reveal a nervous breakdown Russell had had in the past. In a Snidely Whiplash/Joe McCarthy-ish maneuver, he intends to hand it out to the delegates to prove that Russell is too unstable for the job. Meanwhile, someone from Cantwell’s past comes forth with a story about Joe that could blow him right out of politics.

Will Russell who believes that personal smears shouldn’t be used in politics resort to his opponent’s tactics in order to win? There’s a chance that most of you already know the answer because Best Man was also a 1964 movie starring Henry Fonda, Cliff Robertson, and Lee Tracy. It was also on Broadway in 2000 starring Spaulding Gray, Charles Durney, and Christopher Noth.

But for those of you who haven’t seen any other version, I won’t be a spoiler.

During the Saturday matinee, Angela Lansbury and James Earl Jones both fumfied their lines (as my mother would say.) But the audience was so damn glad to see them that they applauded as soon as they came out as well as at the end. Candice Bergman was resoundingly applauded too, even though she knew all her lines.

I wish this play wasn’t relevant today, but unfortunately, it is. Even without the hilarious TV close-up of John Edwards fussing over his hairdo, it’s timely.  And it will be playing for the next 18 weeks, almost up to the election.