GLORIA: a life at the Daryl Roth Theater

Bring your millenials. Most have no idea that we women couldn’t have credit cards in our name, had no guarantee of equal pay, didn’t even have the words for all the sexual harrassment that we had to bear, how much nastiness was directed at the working woman (unless she was a slave in her husband’s business like my own mother.) In the early sixties, two married women in my neighborhood who had children, went to work–one in a chichi dress shop, the other in an office. Both took the same bus to work. Men would pull up to the curb, shout out “whores,” and drive off, or actually try to pick them up for nefarious purposes. These women weren’t strangers to the men who were fathers of their childrens’ classmates. That was how women who went to work were disdained.

And then came Gloria Steinem! To watch her life unfold on stage (Gloria played by Oscar-winning Christine Lahti)) is heartbreaking and hopeful. And just when I was so overwhelmed with our current political catastrophe and the rollback of women’s rights and LGBTQ rights, this play restored me. I vow to become a self-avowed “Hope-aholic” as Steinem is and take action on behalf of the daughters (and sons) of the world. Today I gave a donation to Moms Agains Gun Violence. I retweeted injustices reported on twitter that might never have gotten play in the regular media.

Warning: If you go, don’t stay for the short second act where women in the audience tell their stories. There are folks who don’t know how to end once given the mic. Also, it becomes like Queen For a Day–the greatest applause for the greatest sorrows. Leave on the upbeat. 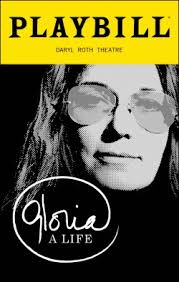