GIGANTIC, at the Vineyard Theater 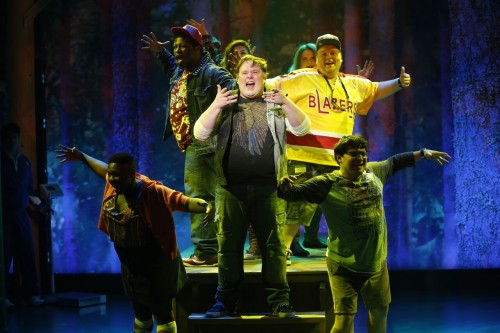 Oh, pity obese teens exiled to weight loss camp for the summer.  Except if it’s Camp Overton in Southern Pennsylvania. Despite public weighing, despite frisking stations to detect Butterfinger hoarders, this collection of out-sized teens will have the hilarious misadventures of a lifetime, and grow along the way, not in girth, but in maturity.

RANDY BLAIR and TIM DRUCKER (Perez Hilton Saves the Universe and Fat Camp) who collaborated on the book, must have asked themselves, how can we make the most bizarre characters plausible and sympathetic? And that’s just what they achieved.

First we meet Robert Grisetti whose goal, day one, is to get himself kicked out. Robert is played by the astonishingly talented MAX WILCOX who I had the delight of seeing in Calico Buffalo. With his terrific voice and charismatic acting, he’s a large presence on stage, no pun. Broadway, what are you waiting for? Cast him!

The camp is run by Mike (BURKE MOSES of Guys and Dolls, Beauty and the Beast, Frogs, Kiss Me Kate) and Sandy (LESLIE KRITZER of Legally Blonde, A Catered Affair, Sondheim on Sondheim.) “What kind of person dedicates his adult life to a summer camp?” a character asks. A zany couple who have been engaged for fifteen years and live in fear that their livelihood will be shut down if their rebellious campers don’t lose weight. There’s hush, hush mention of one camper, just one, who was thrown out (or was he murdered?) LESLIE KRITZER’s dancing, singing, tragic/comic antics and her surprise role merits thunderous applause.

Meet Brent (ANDREW DURAND of War Horse, The Umbrellas of Cherbourg) is the junior counselor (a demotion) is so thrilled with his weight loss that he pole dances and twerks and brags non-stop, a perfect target for the teens to take down. His sister, Britta (KATIE LADNER, Heathers the Musical, Be More Chill, Spelling Bee, who helps out at the camp, has a pet skunk, elaborate external orthodontia apparatus and sometimes disguises herself as a garbage can for stakeouts, makes you roar with every line.

Sexy and oversized aren’t incompatible we learn as we watch campers Vanessa Williams (NYLA WATSON, Showboat) and Lydia (MIMI SCARDULLA, Grease, On the Town) and sassy Daphne (BONNIE MILLIGAN, Kinky Boots) who gyrates and slinks along the stage, belting out rock like the blues. Daphne is the siren who lures innocent “youth group” Taylor (RYAN REDMOND, If/Then, Bring It On) to get in touch with her inner vamp and make a guy hungry for her.

Darnell (LARRY OWENS, Fat Camp, Grease, Dream Girls) signed himself up in order to prove that he’s a worthy candidate for a gastro bypass, is tortured by his Moobs—man breasts– which will be revealed, bare and shimmying.

Anshel (JARED LOFTIN, Gary Goldfarb: Master Escapist) is a hilarious Star Wars/Lord fo the Rings geek who thought he was dropped off at a fantasy camp. Surprise! Tank (COLE RAGSDALE, Manhattan Love Story,) is a lesser character, but not a lesser talent. Watch out for the dumps he takes after Sandy and Mark add laxatives to the food to help with the weight loss!

With a sewage flood, girls from a neighboring camp who are thrilled to be called “emaciated,”Ashley (TAYLOR LOUDERMAN, Orange is the New Black) Marlie (KAYLIN WEST, Devil and the Deep), Aspen (JENNIFER GELLER, Bring it On: The Musical) and end up at Overton, creating a surprise twist and a shakeup that will change everyone’s lives. 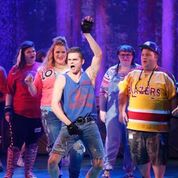 Music by MATTHEW ROI BERGER (Spidermusical) lyrics by RANDY BLAIR, choreography CHASE BLOCK, Spiderman Turn off the Dark). The one drawback, I thought, was that there wasn’t a “moment” a deeper song that didn’t abruptly turn to rock/comedy. One song came close, but no cigar.