FUN HOME now at Circle in the Square

Fun Home gets you where your emotions live. Although it’s based on Alison Bechdel’s graphic memoir, Fun Home, and not your own life, we all know what it feels like to live in a family that has to keep up a façade. Here the façade is literal–a historical house in rural Pennsylvania that the father, Bruce (Michael Cerveris of  Assassins, Sweeney Todd, Evita), has painstakingly restored. You see him pressuring his wife, Helen (Judy Kuhn of She Loves Me, Les Miserables), and their three kids to gussy up the house before public viewings just as he has to gussy up his own public image. Bruce is a man divided—a local high school English teacher, a mortician who took over his family’s business, a home restorer, a man with a wife and kids, and a guy who picks up young men for sex, each of his pick-ups played by Joel Perez (of Roy/Mark/Pete/Bobby Jeremy).

The story spotlights the Alison’s wrenching relationship to her erudite and volatile father. We meet her forty-three-year-old self played by Beth Malone (Molly Brown, Ring of Fire) all alone at her drawing desk, trying to come up with the words, the images, that will help her understand what she’s lived through. And then her past comes  alive, with all the struggles of her own divided self. We see the mature Allison peering over the shoulder of her youngest self, played brilliantly by Sydney Lucas (youngest recipient of the Obie). We meet her college self (Emily Skeggs of I and Silence) at Oberlin, looking back at her high-jinx with her brothers, John (8 year-old Zell Steele Morrow) and Christian (11-year-old Oscar Williams). We see Alison’s college self embracing her own lesbianism and her first lover, Joan (Roberta Colindrez of Mala Hierba, Girls, Boardwalk Empire). And then, we see how the declaration of her new-found sexual identity to her parents sends a wrecking ball to whatever is left of their façade.

Obie-award winning and Drama Desk nominee Director Sam Gold enhances the theme of elusive memory when a piano slides into view or a coffin rises up from the floor and sinks again, interred. Ben Stanton’s lighting makes things seem to appear and disappear as memories in the subconscious.

The music by four-time Tony Award nominee Jeanine Tesori and book lyrics by Tony Award nominee Lisa Kron is intimate. Who can stay dry-eyed with the youngest Allison, (Sydney Lucas) singing about being dazzled by a lesbian with cropped hair, laced-up boots, jeans, and a ring of keys? “Ring of Keys” is still wringing my heart. Allison’s love song to Joan, with lyrics about wanting to major in her body, is both comic and deeply affecting.

With all the rehash on Broadway, #FunHome is worth tweeting about. Fun Home opened to rave reviews at The Public Theater in October 2013, and was extended four times due to popular demand. It was named Best Musical by the New York Drama Critics Circle, and received the OBIE, Lucille Lortel, Outer Critics Circle and Off Broadway Alliance Awards in the 2013-2014 season.

Ticket prices for Fun Home range from $75 – $150 and are available for purchase via Telecharge.com, by calling 212-239-6200, or in person at the Circle in the Square Theatre box office.

Fun Home has partnered with TodayTix to allow its members to enter a mobile lottery via the TodayTix app, available in the App Store or Google Play Store. The entry period will begin each day at midnight, and continue until winners are notified via push notification 3-4 hours before the selected performance begins. Winners will be offered the opportunity to purchase either one or two $32 tickets, and can pick up them up from the box office of the Circle in the Square Theatre. Lottery tickets and seat locations are subject to availability.
Fun Home is produced on Broadway by Fox Theatricals (Kristin Caskey, Mike Isaacson) and Barbara Whitman, along with Carole Shorenstein Hays, Tom Casserly, Paula Marie Black, Latitude Link, Terry Schnuck/Jack Lane, The Forstalls, Nathan Vernon, Mint Theatricals, Elizabeth Armstrong, JAM Theatricals and Delman Whitney.
The Original Cast Recording of Fun Home is available on PS Classics.
####
www.funhomebroadway.com 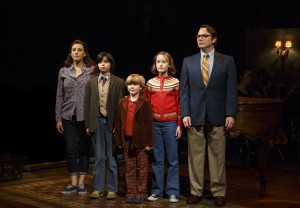