FORBIDDEN BROADWAY comes out swinging at the Davenport Theater

Gerard Alessandrini’s FORBIDDEN BROADWAY is a kooky review of Broadway shows that made it and those that didn’t. Actors include Carter Calvert, Scott Richard Foster, Mia Gentile, Marcus Stevens, and David Caldwell on the piano. Writer Alessandrini co-directed this production with Phillip George.

Wait until you see Marcus Stevens as Woody Allen, singing and shuffle-dancing about his movie-turned-show, Bullets Over Broadway.  The skits are zany, but all more hilarious for being accurate–Broadway is constantly reviving Broadway or doing remakes of movies, all to please major corporate backers that only want tried, tried, tried and untrue material. TV isn’t immune from their swipes. Carter Calvert does a hysterical version of country singer Carrie Underwood miscast as Maria Von Trapp in The Sound of Music.  Carter also out-Laupers Cindy Lauper in her spoof song from Kinky Boots. She also delivers a comic version of Liza Minnelli in Cabaret, but being a Minnelli fan, and feeling sympathetic to her, please, please, no more sarcasm about her!! She’s had enough already! 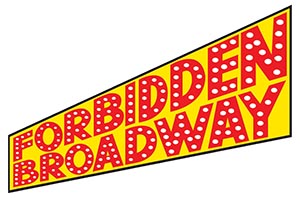 This edition of Forbidden Broadway is being created as the season unfolds. It opened May 4th at the newly renovated Davenport Theater. (354 West 45th Street between 8th and 9th Avenues.) You can see it Monday and Tuesdays at 7:00 pm, Fridays and Saturdays at 8:00 pm, Sundays at 7:00 pm, with matinees on Wednesdays and Sundays at 3 pm. Tickets are %79. Student rush and premium tickets available.

Tickets can be purchased by calling Telecharge at 212-239-6200 ot their website at www.telecharge.com