FALLING, a new play at the Minetta Lane Theater 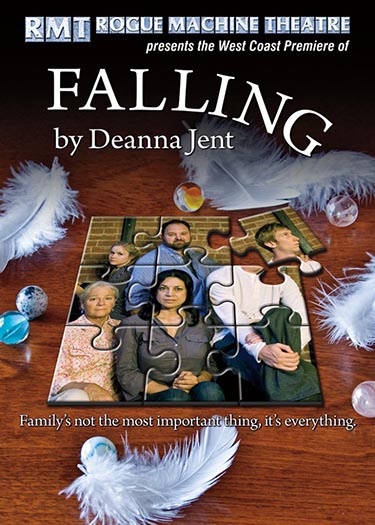 A new play by Deanna Jent, directed by Lori Adams

Autism seems to be on the rise, or at least the diagnosis is. We are let into the Martin’s lives, a family who is completely dominated by their eighteen year old son, Josh”s (Daniel Everidge) autism. He grumbles, has strange hand movements, paces, has to have everything structured without variation, can’t stand noise, hits his fist to his forehead, and often has violent outbursts that endanger his family. The obvious answer would be a group home, but there are waiting lists and most of them are dangerous. Josh, although often belligerent, would be helpless to defend himself.

The father, Bill (Daniel Pierce) would like to have sex with his wife, Tami (Julie Murney), but Tami is so overloaded with caring for Josh that she can’t even let her husband touch her. Instead, she prefers the warmth of a drink. Their teenage daughter, Lisa (Jacey Powers), wants to do normal teen things, like adopt a dog that showed up at their doorstep. She is furious at her brother, wishes him gone, dead. She lives in fear of Josh hurting her parents. When Bill’s mother, bible-toting Granny Sue (Celia Howard), comes to visit, trying so hard to help by suggesting prayer, everything goes awry. Everyone scrambles to figure out how to find a life for themselves plus meet Josh’s needs.

Sounds like a grim family portrait, but there’s an eerie theatrical twist (don’t want to be a spoiler) that brings this seventy-five minute play into the realm of art.