END OF THE RAINBOW where you’ll find Judy Garland 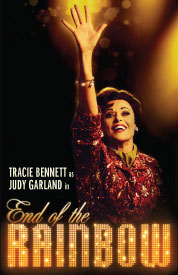 You will see her, hear her, and feel the same spellbinding electricity that she delivers in Tracie Bennett’s awesome performance of Peter Quilter’s End of the Rainbow at the Belasco.

You will be brought back to a London hotel in December, 1968, when Judy Garland is about to make one of her comebacks in a series of concerts. She’s broke, can’t pay the hotel bill,  and is exasperating her young fiancé and new manager, Mickey Deans (Tom Pelphrey) by demanding pills and booze, and sneaking off to get them. Also with her is her loyal pianist, Anthony, played by Michael Cumpsty, (an amalgam of all her gay followers) who offers her true love, encourages her not to perform, to just go off and live with him, let him cook for her, let him take care of her in every way, have a life where she’d never have to go onstage again. The air sparks with the rancor between the three stars. Mickey accuses Anthony and all Judy’s gay followers of causing her demise by adoring her no matter how much she spirals downward. And Judy, not believing at heart that anyone loves her for herself, is as hell bent on getting love as she is on pushing it away.

Watching this play, you understand that the high price of a performance means more than the cost of your ticket. You feel in the clenching of your kishkes the terror a star feels that maybe this time she won’t be able to deliver. Especially when a star has begun performing so early (her family was in vaudeville) and driven so hard that there has never been a chance to develop a sense of oneself beyond stardom.

Tracie Bennett manages to capture Garland’s cataclysmic nervousness that shows in her jangly movements as she whirls about the stage, the boozy gleam in her eyes, her fatigue. After swallowing a handful of Ritalin, Bennett delivers a desperate “Come Rain or Come Shine” that is terrifying.

I feel as if I want to make changes in the script. Like, who am I to do this? There is a lot of Garland acting crazy, and sometimes hilariously, especially when she accidentally downs pills for dog mange and pretends she’s morphed into a dog. But there are moments where something deep is beginning, such as when she speaks of her childhood and  just drops off. True, most of Garland’s fans have read her biographies. Still, the play can use the balance of a bit more of the thoughts of that past that ransack one’s mind during angst. When Anthony says that Judy saved his life, I want to hear a few more lines about that.

Perhaps, like Garland’s life, I just didn’t want the play to end.