AT THE ROMULUS LINNEY COURTYARD THEATRE ON 42ND STREET

Eve Ensler (Vagina Monologues) turns her attention to adolescent girls. Based on her 2010 book of the same name, Emotional Creature is a musical survey of what they face. Through monologues, (most original to me is the one about a Chinese girl working in a factory in China to produce Barbie doll heads), dance and song, we become immersed in the terrors of being left out, of an unwanted pregnancy, being part of the slave trade, running from an African village to escape a clitorectomy, being gay, and most anything else that could befall a girl internationally.

The takeaway message of Emotional Creature is to learn to say no to anything that limits self-expression, to defy convention, and most of all, to create your own sisterhood where you can share your secrets, your true self, and expect to be understood and supported.

The actors are remarkable. Ashley Bryan was called a little too much attention to herself as “acting,” but Molly Carden could strike just the right note of vulnerability, tears trembling in her eyes.  Joaquina Kalukango is Tony material in any of the roles she takes on.  Olivia Oguma has a quirky, standout delivery, especially in her song about her nose being bobbed against her will.

When you see an Ensler play, you become part of a movement for social change. She gives of her time and opens her purse for causes such as a non-profit movement to end violence against women and girls and gives us an opportunity to enjoy ourselves at the same time. 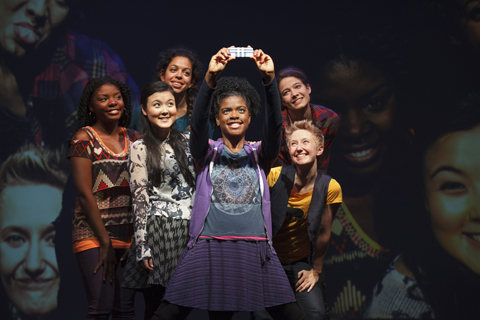