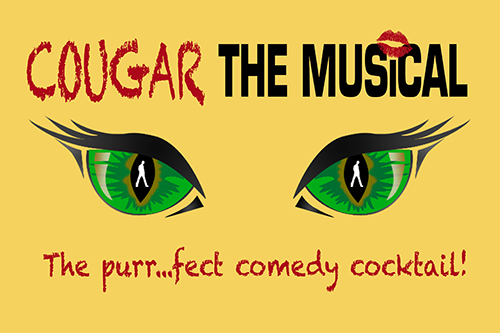 When it comes to entertainment, what hasn’t Donna Moore done? She’s done stand-up, commercials, concerts, political comedy groups, and three and a half year run in cabaret. At nine years old, she wrote a play that was featured on the pilot of Zoom. Remember PBS’s Zoom? “Come on and zoom, zoom, zoom.” Now Donna Moore’s Cougar the Musical will be opening off-Broadway at St. Luke’s Theater, directed by the award-winning choreographer and director, Lynne Taylor-Corbett.

Set in a cougar bar, Cougar the Musical, helps you say yes to life, friendship, trust in yourself, and proves that you’re never too old for romance.

Rather than seeing cougars as clawing women trying to forget that their only heat is now from a hot flash, Ms. Moore presents three women who are unleashing themselves from patriarchal domination and defining their own identity.

Not only is Cougar the Musical a great night out for women friends of any age (and I saw plenty of guys in the audience yucking it up, too.) but there is something to be learned: the power of living in the light. Moore used positive affirmations to cure herself of lupus, so why can’t we women cure ourselves of limitations imposed on us by society.

The sound track is one that you’ll want to own: songs you can actually remember and want to.

New York: Donna Moore’s Cougar the Musical will get its World Premiere this summer under the direction of Tony Award and Drama Desk Nominated director/choreographer Lynne Taylor- Corbett at St. Luke’s Theatre (308 West 46th Street). Cougar the Musical will begin performances on Friday, August 10 and will open on Sunday, August 26 in an open ended run.  Tickets are $39.50-$89.50 and can be purchased at Telecharge.com or by calling (212) 239-6200