Diplomatie (Diplomacy). Will Paris be saved?

What a nerve-wracking thriller. Like most, there’s the countdown. It’s the summer of ’44 and the allies are winning the war. As a last hurrah, Hitler orders that Paris shouldn’t fall into the enemy hands, and if it does, Paris should become “a field of rubble,” all the people, cultural treasures, scenic sites, obliterated. Instead, on the dawn of August 25th, Swedish Consul Raoul Nordling, (Andre Dussolier) sneaks into the hotel suite of Commander General of Paris, General Dietrich Von Cholitz, (Niels Arestrup) who has already planted the mines on The Eiffel Tower, The Louvre, The Notre Dame, and on the bridges over the Seine, and starts a hair-raising game of cat and mouse to persuade the general to give up his deadly plan.  You will be astonished at how much you worry about Paris, although many of you have been there many  times and just how much drama these two great actors can deliver. 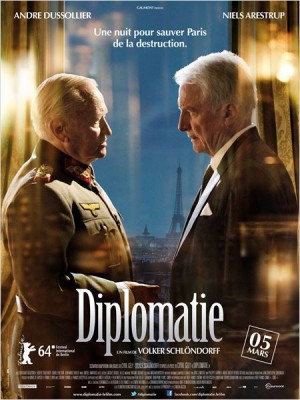