CINDERELLA at The Broadway Theater 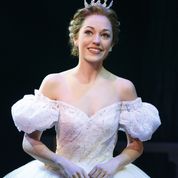 As you are ushered to your seats you will already be oohing and aahing over the forest stage set. And when the show begins, you are a child again. Just let me see fairy godmothers flying through the air and I’m flying, too. The right-before-your-eyes instantaneous change of wardrobe from the ash-bedaubed, raggedy step-daughter and step-sister to the breathtaking future princess makes you believe in magic.

RODGERS + HAMMERSTEIN CINDERELLA was originally written for TV in 1957 by the Richard Rodgers and Oscar Hammerstein II. This debut for Broadway has music by Richard Rodgers, lyrics by Oscar Hammerstein II, but the new, wisecracking book is by four-time Tony nominee Douglas Carter Beane (XANADU, SISTER ACT, LYSISTRATA JONES, THE LITTLE DOG LAUGHED) makes it so today. Grimm doesn’t feel so grim anymore.

What a job the director, Mark Brokaw (CRY BABY, THE LYONS, HOW I LEARNED TO DRIVE) and the choreographer Josh Rhodes have done. The music, adapted by David Chase, will have you humming.

Tickets to RODGERS + HAMMERSTEIN’S CINDERELLA are on sale now through Tele-charge and can be purchased by calling 212 239 6200 or online atwww.telecharge.com.

Besides the original score which I remember my mother singing at the kitchen sink–“In My Own Little Corner,” “Impossible/It’s Possible,” “Ten Minutes Ago” and “Do I Love You Because You’re Beautiful?,” this CINDERELLA includes other Rodgers + Hammerstein songs.