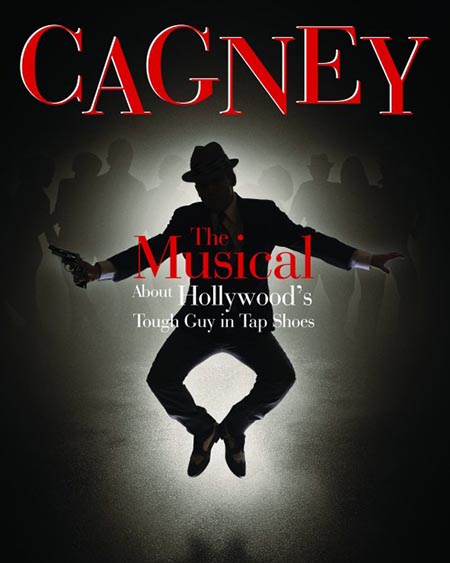 Who could play the 5’5” Cagney better than Cagney’s look-alike, sing-alike, dance-alike, and act-alike—Robert Creighton? Creighton, a veteran of Broadway, was in The Mystery of Edwin Drood, Anything Goes, and The Lion King. Now, along with Christopher McGovern (Fame, First Wives Club), he wrote the music and lyrics for Cagney. And of course, much of it was written by George M. Cohan. The book is by Peter Colley (The Donnelly).

I admired the real Cagney so much that I was afraid the show would reveal something about him that I didn’t want to know. Am I sick of stories about drug-addicted, alcoholic, actors that abuse everyone close to them! But Cagney is portrayed as I’d hoped. He was loyal to his wife, Willie, a singer and dancer he met while doing Vaudeville. He remained as scrappy as he’d been growing up in the Lower East Side of New York, fighting bosses for fair pay for the working poor. For charitable contributions that turned out to have a link to the Communist Party, Cagney was hauled before the Dies Committee, a precursor of the House of Unamerican Activities. When Jack Warner made him do one gangster film after another that brought the studio, not Cagney, a fortune, Cagney battled him and became an active member of SAG (Screen Actor’s Guild).  What was Cagney’s preoccupation that almost cost him all his money? He didn’t want the last reel of his life to be himself as a gangster. He broke away from Warner and made films with a positive message which were such a loss that he had to go back to the dreaded studio.

Produced by Riki Kane Larimer (Fiddler on the Roof, Tappin’ Thru Life, On The Town, Gigi) and under Matt Perri’s musical direction (Finding Neverland, Rodgers and Hammerstein’s Cinderella) and Bill Castellino’s direction, there’s a delightful vaudeville feel to the show.

The cast of six characters morphs seamlessly into so many roles that it’s fun trying to pick out who is playing who. Danette Holden who played Mrs. Hannigan in Annie was Ma Cagney, Warner’s assistant Jane, and more. Jeremy Benton (42nd Street) plays Bob Hope, and an associate choreographer, and Dance and Fight Captain. Josh Walden (Ragtime) plays Cagney’s brother,  and more. I stopped counting the parts Ellen Zolezzi (Ellen Zolezzi of Seussical) played and all the parts besides Jack Warner that Bruce Sabbath, (Company) played.  Creighton was Cagney all the way through.

Choreographer Joshua Bergasse (On The Town, Gigi), has the cast tapping their hearts out (and mine.) Wait until you see the scene of writers tapping out scripts on imaginary typewriters!

You’ll be giving your regards to Broadway and on your feet, applauding.

Cagney is playing at The Westside Theatre – Upstairs, 407 West 43 Street. Tickets for Cagney may be purchased by calling Telecharge: 212-239-6200, or by visiting Telecharge.com.