Brooke Shapiro as Ermengarde in Hello Dolly at Goodspeed

The whole cast shone in this revival, but I’m paying tribute here to my niece, Brooke. When she was five-years-old, she went to see Annie and after that, she stopped everyone who would listen (and some who wouldn’t) to ask, “Want to hear me sing Tomorrow?” She has worked at her craft ever since, and it shows. Even before she graduated the Hartt School a few weeks ago with a BFA in Musical Theater, she had already starred in Hair Spray at the Gateway Playhouse and The Zach Theater, as well as other roles. She’s not waiting until Tomorrow for success! 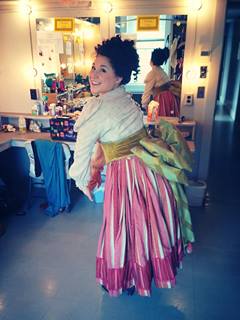