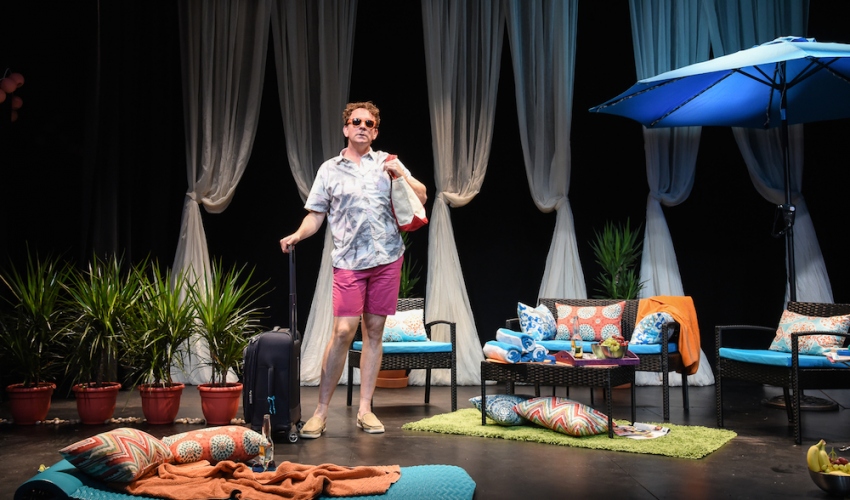 In BRIGHT COLORS AND BOLD PATTERNS, writer and performer DREW DROEGE, as Gerry delivers almost nonstop laughs for 80 minutes, making you seriously worry that your bladder won’t hold out. No help is the poolside setting with its suggestion of water, the amount of liquor Gerry sloshes down, and that halfway through the show he relieves himself in a planter.

The title comes from the request on the invitation to “refrain from wearing bright colors or bold patterns,” which has worked Gerry up into a frenzy. It also fits the theme that beige isn’t one of the colors of the gay rainbow and the LGBT community shouldn’t try to fit into cultural blah.

Droege peoples the stage with invisible, but emotionally-loaded characters (his exes and the young architect lover of one of them) by addressing his comments to empty chaise chairs. In his monologue, Droege ingeniously develops their backstories and present action so that we believe each of them is there.

Gerry arrives at a pool party in Palm Springs the day before the gay wedding of his old friend Josh to a conservative guy, Brennan. Just seeing Gerry’s expression and hearing the sound of his voice spells out what he thinks of Brennan and his mother, Harriet, who he urges everyone to kidnap and drag to a funky gay bar. In his rant, Gerry delivers hilarious one-liners. After saying that Brennan has the personality of an ottoman, he adds, “Does anyone after a robbery say, `Oh, my God, they made off with my ottoman?”

The director, Michael Urie, star of the current revival of Torch Song, keeps our eyes on Gerry, the moving target, as he makes his way around the bright, bold, and space-enhancing set designed by Dara Wishingrad. Producer Zach Laks chose a stand-up show.

A great night out would be you and your friends buying a block of tickets to see who gets the most cultural references dropped by Droege. The only one I’m sure of is Target.

for tickets go to: