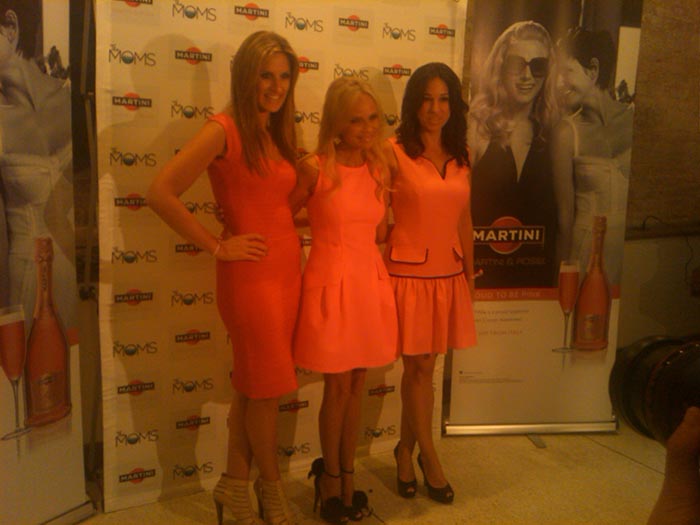 Today I was lucky enough to attend the “Toast to Survivors” luncheon in support of Breast Cancer Awareness Month  at Alison Eighteen 15 West 18th Street. MARTINI sparkling wine (Oh, are they good!) teamed up with Tony award winning singer and actress Kristin Chenowetth (Wicked) and Denise Albert and Melissa Gerstein of The MOMS

MARTINI donated $10,000 to Kristin Chenoweth’s charity, Maddie’s Corner, to be allocated to the Breast Cancer Research Foundation and Right Action For Women.

Kristin Chenowetth spoke of how she took off time off to care for her sick mother as she battled breast cancer several years ago and how the experience impacted her life. As an adopted child, Kristin felt that her mother had saved her, and her mother’s cancer helped Kristin find a way to return the favor. In a Q&A, Kristen told the audience that she’s doing well in her own recovery from the terrible work-related accident where she got a bad concussion, a neck injury, and broke her nose. “Why me?” she said to her mother. Her mother’s response was, “Why not?” And if we all ask ourselves that question, we’ll be able to help ourselves and others more effectively.

Elizabeth Chabner Thompson, MD, MPH, a practicing Radiation Oncologist and the founder of BFFL Co, Best Friends for Life, a company whose mission is to improve patient experiences, shared her own fight against breast cancer.

Dee Dee Ricks, a patient advocate who’s been named among Wall Street’s Most Powerful Women, made a documentary about the difference between her care and the care of an Afro-American uninsured woman who didn’t receive medical treatment until she was stage four and died. http://www.theeducationofdeedeericks.com/  When Dee Dee’s oncologist said, “Poverty should not be a death sentence,” Dee Dee dedicated herself to patient advocacy for uninsured women. The question she left with me and I’ll pass on to all of you is, “What is your legacy?” The answer can be your life mission.

THE MOMS is multi-platform lifestyle brand featured on television, online, in print and in taxicabs around the country.  The MOMS (Denise Albert and Melissa Gerstein) co-created Strut, the first ever mom fashion show that presents at Mercedes Benz Fashion Week.  For the past year, The MOMS co-hosted a national half-hour TV show on NBC nonstop called Moms & the City and A Dad Named David.  They currently contribute to CBS’ On The Couch.   Albert and Gerstein write and produce daily content online.  The MOMS contribute to Babycenter and The Huffington Post Parents and Denise writes for Huffington Post Divorce. The MOMS also host their brand of Mamarazzi® events where they bring the celebrity to the moms and moderate the parenting conversation.  These events have included: Sarah Jessica Parker, Kris Jenner, Hugh Jackman, Maggie Gyllenhaal, Viola Davis, Jada Pinkett Smith and Jennifer Garner.