The characters–Ethan Hawke (the dad) Patricia Arquette (the mom), Ellar Coltrane (the boy) and Lorelei Linklater (his sister) were filmed over a twelve year period. That’s right. The little boy at the beginning fighting in the car with his sister is the very same scruffy teenager who is naked in bed with his girl near the end of the picture.. And the little sister, who punched the pillow in the car that was barricade between them, has arranged the room for her brother and his girl to have sex in.

The slow-paced film has the feel of a reality show. You often could swear that you’re sitting in the kitchen with the characters. It’s both nostalgic and an ode to growing up. I was fascinated and recommend it, but I hope this doesn’t begin a spate of movies just like it.  It works because it’s unique.

Most screenwriters get to write a script and that’s that. Oh, sure, there’s revisions. But screenwriter Richard Linklater had to keep writing over the years. What until you see the scene that pivots around the Obama / McCain  campaign! 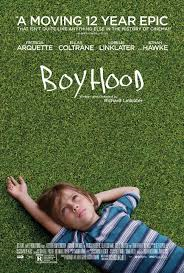