This story about a has-been, aging former superhero, Riggan, who, twenty years ago, did three Birdman movies, but refused to do a fourth because he wanted to prove himself a serious artist, seems written for Michael Keaton, who played one of the most fascinating Bruce Wayne’s in Batman and Batman Returns. Riggan, to prove his art, finances his own Broadway show that’s based upon Ray Caver’s famous short story, What We Talk About When We Talk About Love.  Riggan may have tried to leave Birdman, but Birdman, a giant black griffin, won’t leave him. Riggan can move objects, levitate, and hear the constant nattering of his alter bird ego who follows him about, encouraging him to not leave that part of him behind. Everyone, including a New York Times critic who decides to make or break plays before she’s actually seen them, thinks Riggan, like Icarus, is flying too close to the sun, and take the inevitable splat to earth. His daughter, Sam, that big-eyed waif Emma Stone, just out of rehab and helping with the production, is furious over having been daddy-less all her years. When she sits on a ledge of the theater roof, her feet dangling down, since I’d personally known three women who committed suicide by jumping off roofs, I got so panicky that I covered my eyes.  Still, my heart beat in my throat.

When a replacement is needed for Riggan’s costar (telling you why would be a spoiler) in comes big-named Mike Shiner, Ed Norton who, during rehearsals, teaches Riggan (and us) about having to know the intention of every line. Great advice for writers, too.

There’s a cool blur between what is in Riggan’s mind and what is real. Are we watching The Secret Life of Walter Mitty or is Riggan soaring through the city? You may never decide, but you’ll love the ride. 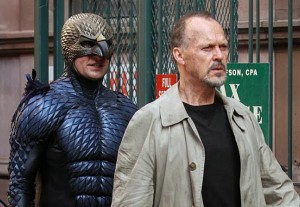