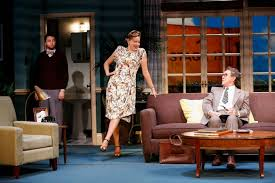 How brilliant  writer Mike Bencivenga was to write BILLY & RAY, a hilarious and sometimes heartbreaking comedy, the true story of the birth of film noir by two seemingly mismatched writers–fusty novelist Raymond Chandler (Larry Pine of Homeland, House of Cards, The Seagull, The Royal Family to name a few) and outrageous screenwriter, Billy Wilder (Vincent Kartheiser of Mad Men) when they collaborate to adapt the novel, Double Indemnity, to a screenplay. Set in the 1940’s, director, Garry Marshall, helps the actors make the most of the battles the writers have with each other and the shenanigans they have to pull to get anything racy past the censors. The pathos comes from learning the effect of WW ll on Chandler and Wilder. Studio Chief Joe Sistrom (Drew Gehlig of On a Clear Day and Jersey Boys) uproariously plotzes over the empty pages he fears he’ll have to show the studio and is always on the verge of quitting and going back to New York.

Sophie von Haselberg (Cat and the Canary) playing Helen Hernandez, Wilder’s assistant, looks so much like her mother, Bette Midler, that you have to keep blinking at first, like maybe you fell into a time warp. But as soon as you shuck that off, you fall in love with Helen, her struts, her looks of sympathy, her wisecracking, and untapped talent as a writer herself.

Scenic designer, Charlie Corcoran, will wow you. I took a picture of a diorama of the set that was on display: 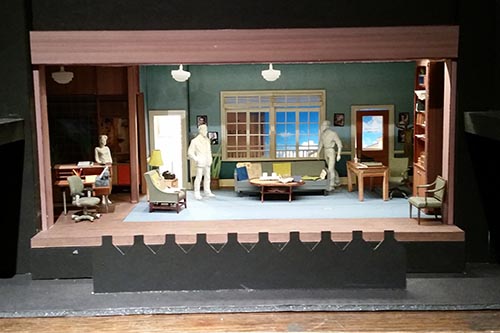 For performance and ticket information, call The Vineyard box office at 212/353-0303 or visit www.vineyardtheatre.org.