A Wedding in Great Neck by Yona Zeldis Mc Donough 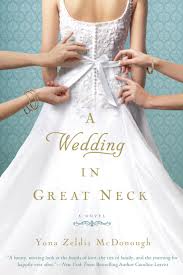 A WEDDING IN GREAT NECK

There’s a wedding in Great Neck and you’re all invited. The invitation is right at the front of the book. Angelica Silverstein from Great Neck is to be married to Ohad Oz of Israel. But storm clouds roll in, bringing heavy rains and troubles on the “happily-ever-after” garden wedding. Angelica, because of her triple threat—beauty, brains, and ambition–has been envied by her older sister Gretchen, whose own life has been floundering. Gretchen’s marriage has failed, she’s never liked any of her jobs, and her twin fifteen-year-old daughters, Justine and Portia, have become difficult. In fact, Justine, unbeknownst to Gretchen, is planning to do something horrible that will not only ruin the wedding, but destroy Angelica and Ohad’s chance of a future together. Will Justine be stopped in time? That’s just one of the reasons you keep turning the pages.

The other reason is that shortly after their introductions, the main characters in this comic novel send you invitations into their inner lives, including the Pomeranian lapdog named “Darling,” who begins the book barking hysterically, disrupting everyone’s sleep, is the darling of Betsy, mother of the bride, who had never even let a goldfish into her house and now is under the spell of this dog. But through Mc Donough’s careful observation and artful writing, Darling becomes ours too. In a scene where Betsy’s mother, Lenore, (my favorite character) holds the dog, Mc Donough writes, “Lenore looked down at the dog whose eyes held hers for a long moment before she lowered her face to rest on her tiny paws. Her ears went back and her eyes narrowed to slits.” You get to know the weight of Darling against you, the comfort.

And when Gretchen (who starts out as a bit of a kvetch) reviews her own meandering life in comparison to Angelica and her brother, Teddy’s goal directedness, she thinks, “Instead, she (Gretchen) lived her life like a handful of confetti, tossed up into the air and scattered down—gracefully, she liked to think, a little here, a litter there.”  Looking at Gretchen, Lenore, “could smell the indecision on her (Gretchen), ripe as the scent that emanated from a bunch of soft, spotted bananas.” The metaphors are engaging and have such strong sensory detail that the characters are nailed. Even Mc Donough’s description of inanimate objects is thrilling. The bed in one of the rooms of the mansion owned by Don, Angelica’s stepfather, has ivory sheets and “a gaggle of small fringed pillows.”

Mc Donough’s language is a surprising mix of contemporary and Victorian. I had forgotten all about words such as “thrall,” or “techy,” or “lace bedecked.” And how long has it been since I’ve heard about someone “marrying-up” as Betsy did after she left Lincoln, her alcoholic husband, and wed Don, an affable, yet powerful bulky millionaire who owns the grand house where the wedding takes place.

It’s hard to talk about this book without committing “a spoiler,” because each new flare-up brings its own surprise and danger. But for a comic novel, there’s a lot to reflect on in terms of politics of the Mideast and prejudices within the community and you will see, in these matters and others, that the Silversteins do not fall into stereotypes.

I found myself dawdling when I neared the end of the book. It was as if I were one of the guests who had looked forward to this wedding for a long time and couldn’t bear to leave it.