A Psychic looks at Woody Allen’s Magic in Moonlight 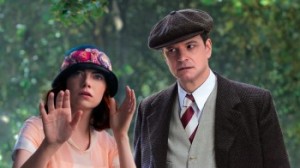 Stanley Crawford (Colin Firth) the most famous magician of his age who performs as Wei Ling Soo, is also a psychic debunker who follows the teachings of the Nietzsche and Hobbes, philosophers who ensure pessimism. Crawford, a mouthpiece for Woody Allen’s musings, is constantly reminding us how brilliant and high-minded he is.  His childhood friend, a lesser magician, Howard Burkam (Simon McBurney) talks him into going to the Cote d’Azur where this “psychic” has a wealthy family in her thrall. When Sophie’s readings aren’t comic, they are a snore. My husband, who hotly disagreed, snoozed during at least fifteen minutes of it. The magic, for me, was the setting, and a scene that took place in an old observatory, and Eileen Atkins performance at Aunt Vanessa. Although Woody Allen struggles with whether or not to accept the hope of the great beyond like “lesser intellects” …hmm, could he mean the optimistic Leibnitz who developed calculus independent of Newton….his obsessions remain unchanged. Hey, Emma Stone is way too young for Colin Firth, who, although he professed love for her, looked rather embarrassed and quite avuncular.

So tired of the whole discussion of whether people of high intelligence can believe in psychics. This screenplay might have rocked thirty years ago.