THE WORLD PREMIERE OF

A new play by Obie-Award winning ADAM BOCK and directed by two-time Obie Award Winner ANNE KAUFFMAN introduces us to Nate Martin, a gay copy editor who tries to figure out his loneliness, his breakups, his life, using astrology, which he barely believes in himself. Nate is played by DAVID HYDE PIERCE (The Heidi Chronicles, Frazier, Spamelot.) Nate breaks the fourth wall, coming right out to address the audience and we feel like answering him. His delivers his quirky, comic lines deadpan. His plight as a serial dater in New York, finding himself middle-aged, isolated from his family in Milwaukee where he couldn’t comfortably live as a gay man, leaves him abandoned. The sounds of New York apartment dwelling—someone calling “Gary, Gary,” street sounds, distant arguments, have, during the silences, a weight in themselves that makes the environment its own character. BRAD HEBERLEE (Small Mouth Sounds, Codes of Conduct on HBO) is Nate’s “best friend” who he could never date. And why not? I can’t stop asking. But that’s one of the rules being alone in the cosmos, I guess.

I don’t want to spoil the amazing curve ball that is thrown with the suck-in-your breath talent of scenic designer LAURA JELLINEK. 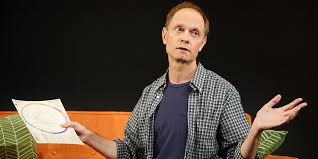