A LATE QUARTET, a grace note of a film 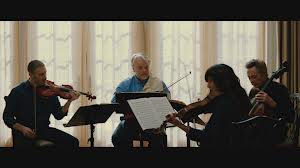 A Late Quartet is a quiet crescendo of a movie that will replay in the chambers of your heart long after you leave. A New York-based quartet, The Fugue, faces a crisis when their cellist, (Christopher Walken) announces that he has just learned that he has Parkinson’s. It’s their 26th season together. And then, the group: Philip Seymour Hoffman, Mark Ivanir, and Catherine Keener. Soon we learn about the passions, intrigues, and ambitions that have been held in check for the sake of harmony.

A point to remember whatever you’re working on! Even a relationship.