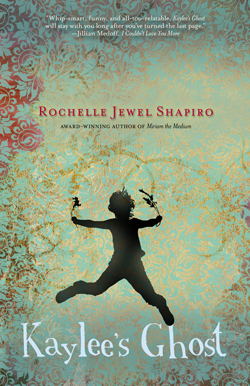 Grandmother Miriam, thrilled that her granddaughter, Violet, seems to be psychic, wants nothing more than the chance to mentor her the way her own Russian grandmother, Bubbie, had done with her. But Cara, Miriam’s daughter, a modern businesswoman who remembers all too well the downside of living with her psychic mother, digs in her heels. As things become more fractious in the family, Violet, a brilliant and sensitive child, is torn between her mother and grandmother, until Miriam’s gift backfires, bringing terrible danger to those she loves. Can Miriam put things right in time, or is it already too late? A mesmerizing story about life here on Earth and after we’ve passed on, Kaylee’s Ghost is also a domestic drama spanning five generations, a tale about forgiveness, letting go and discovering who we are meant to be, no matter how unusual.

Like Miriam Kaminsky, Rochelle Jewel Shapiro is a phone psychic who lives in Great Neck, N.Y. with her pharmacist husband. Articles have been written about her psychic gift in such places as Redbook, The Jerusalem Post, the Dutch Magazine, TV GID, and the Long Island section of the New York Times. She’s chronicled her own psychic experiences in Newsweek (My Turn), and The New York Times (Lives) which can be read on her website at http://rochellejshapiro.com.

Charming, warm and hilariously funny, Shapiro’s book looks at the family ties that bind and sometimes tie us in knots with grace and aplomb. A real-life psychic, she paints an unforgettable picture of a wife and mother who inherited her “bubbie’s” gift.  Filled with characters so memorable, you expect them to come to dinner.  — Dana Kennedy, MSNBC correspondent and New York Times contributing writer

“A mother’s love–especially when she’s a psychic–can be both a gift and a curse. In her endlessly charming novel, Rochelle Jewel Shapiro reveals how far we’ll go to protect our children, even as we’re watching them leave. Whip-smart, funny, and all-too-relatable, Kaylee’s Ghost will stay with you long after you’ve turned the last page.”  —Jillian Medoff, author of I Couldn’t Love You More and Hunger Point

Heart-stopping, poignant, and wryly comic, Kaylee”s Ghost explores the ties that bind mothers, daughters, grandmothers, and grandchildren, both on earth and in the spirit world with wisdom and grace. I couldn’t put it down!

—Robin Gorman Newman, Founder of Motherhoodlater.com and associate producer of the international play, Motherhood Out Loud.